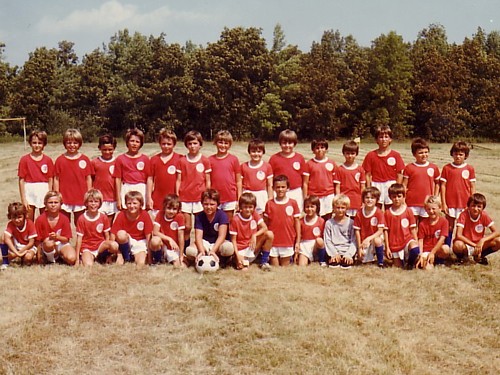 In 1977 a youth soccer program was established, and this became one of the most significant endeavors in Croatia Hamilton’s history. The main proponents of this idea were gentlemen such as Vladimir Baotić, Vinko Granić and Mile Jovanović. They realized that the Club had to grow from within in order to sustain itself and to have a distinguished future.

In the beginning, this required a lot of time, character, and courage. But with help of volunteers — mainly parents of the children involved — the program took off and peaked during the late 1980’s and early 1990’s.

Having the support of Croatian teams from the homeland along the way has also been instrumental in promoting our youth program. An example of this would be the 1991 visit to Hamilton by Dinamo Zagreb, which included many prominent players such as Croatian national keeper Drazen Ladic (pictured with HamCro youth).

While experiencing many ups and downs, the youth movement has produced new generations of Croats who are proud to support their local community, their nationality and their culture.

The program started out with three teams in 1977, but it quickly grew to as many as eight teams in the 1980s. The youth teams of this decade won numerous titles and competed in many top level tournaments across Canada, the United States, and beyond. By 1989 Croatia Hamilton boasted a team in almost every available age group.

At this time another Croatian youth soccer program that was run out of Holy Cross Croatian Church was beginning to deteriorate. It was in 1989 that the two organizations decided it was best to merge as one and develop players under one unified Croatia Hamilton, resulting in many productive years of soccer.

Sadly the success of the late 1980s and early ‘90s did not last and the program took a step back as the 20th century came to a close.

The city youth league in Hamilton had disbanded which forced ethnic club teams to join regional leagues with greater travel requirements. As a result, interest in running youth teams faded and only one youth team remained active at the turn of the millennium.